UMD bundles allow loading separately compiled and deployed microfrontends. This can be already used today together with default Angular applications and libraries.

After starting a blog series about Module Federation, I’ve got a lot of positive response. This emphasizes that loading separately compiled and deployed code is really needed in some scenarios. As bundlers like webpack, and hence the Angular CLI, did not allow for this so far, Module Federation is a big game changer.

However, Module Federation depends upon webpack 5 which is currently in beta and will not be used by the Angular CLI before this fall. Although time solves this issue for us automatically, some people are wondering how to accomplish what Module Federation is doing already today.

Interestingly, there are several approaches and here I present one of them: Loading separately compiled UMD bundles. The source code can be found here.

The approach presented here has been inspired by the work of Victor Savkin and by a great conversation I had with Rob Wormald several months ago.

Even though everything I’m showing here works directly with Angular and the Angular CLI, I’m using an Nx workspace because it provides lots of nice features for big systems subdivided into tiny parts. For instance, it allows visualizing them: 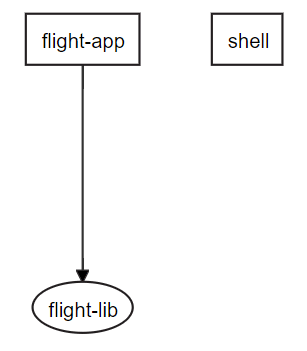 The shell app in our example is capable of loading separately compiled and deployed libraries like the flight-lib: 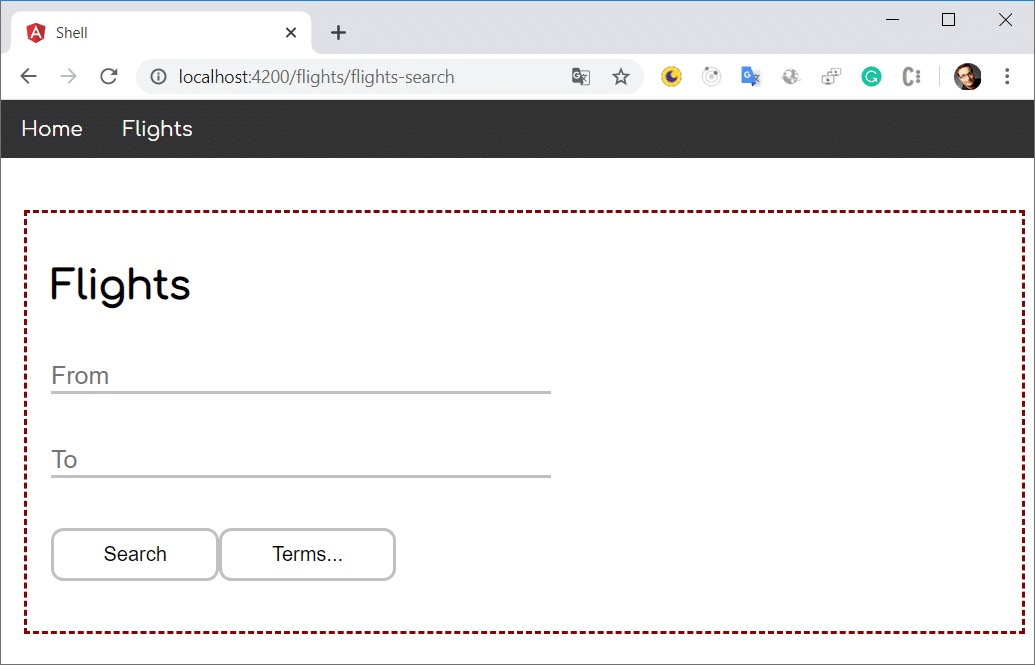 If we wanted to start the flight-lib in standalone mode, you would use the flight-app which directly references it.

Of course, when loading the flight-lib into the shell, we don’t want to load all the dependencies like Angular itself one more time. Instead, we want to reuse the already loaded Angular instance. For this, we are going to use UMD bundles which lookup dependencies in the global namespace if no module loader is used.

Also, UMD bundles can export elements to the global namespace. Our shell will leverage this to get hold of dynamically loaded libraries.

If you wonder how to get UMD bundles for our libraries, I have a good message for you: We get them automatically when building our library because the official Angular Package Format prescribes it among several other formats like ES5 and ES2015 bundles using EcmaScript modules.

The flight-lib is a traditional feature library with child routes:

There is really nothing special about it. After building it (ng build flight-lib), we get the following folders:

Each of these folders contains the library compiled into < specific module format. The UMD bundles can be found in the bundles folder:

By looking at the file size of the minimized version, you can tell that it only contains our code and not the code of the dependencies referenced. Now, you only need to deploy these files — at least the minimized bundle — to any webserver of your choice. To simplify this demonstration, I’ve just copied it over to the shell’s assets folder.

Also the shell is a traditional Angular application. It just uses two helper functions for loading the separately compiled UMD bundle and for sharing libraries like Angular with it. In this section, I thread these functions as a black box. In the next section I will reveal their implementations.

To load the UMD bundle, I use the router’s lazy loading capabilities:

At first sight, this really looks like traditional lazy loading. However, instead of a dynamic import I’m using the helper function loadModule. This is needed because when using webpack — and hence the Angular CLI — a dynamic import assumes that the referenced code is already available at compile time. Of course, here, this is not the case as we want to load separately compiled stuff.

Here, flights is the name of the Angular project (and hence the Nx workspace) and flight-lib is the library’s name. If you are not sure about these names you can look them up in the first 3 to 5 lines of your UMD bundle.

For such bundles, we also need to expose all libraries it needs via the global namespace. For this, I’m calling my helper function

before bootstrapping in the file main.ts.

Now it’s time to look into the two helper functions used by the shell. The function loadModule is basically dynamically creating a script tag to load the passed UMD bundle:

This is a very common way of dynamic script loading which is normally hidden behind libraries. The moduleMap makes sure each bundle is only loaded once. Please also note that the returned promise is resolved with the window object which represents the global namespace in the browser.

The helper function initExternals is just putting the shared libraries into the global namespace where the separately compiled UMD bundles expect them:

To find out about the right location like ng.core or ng.common, just have a look into this libraries’ UMD bundles. It should be used there in the first 3 to 5 lines of code.

The approach outlined here is simple and can be used with Angular libraries already today. The bundles are small because they only contain the lazily loaded code and no dependencies. They are always shared with the shell.

One downside is, that the shell needs to provide all the dependencies the library needs. They have to be either part of the shell upfront and exposed as shown here or loaded alongside the library in question. Also, traditional lazy loading does not work from within an UMD bundle as the CLI’s build task is not splitting UMD such bundles. However, traditional lazy loading works well in the shell and an UMD bundle can load further UMD bundles as shown above.

One benefit of the approach outlined here is that we don’t need to know the amount of microfrontends during compile time. Instead we could load a configuration at runtime telling us how many microfronts are available and where they can be found. However, eventually there will be a webpack plugin which allows the same.

If you want to get started today, the "light" approach shown here might be the best you can have today. However, keep an eye to the further development of Module Federation and to approaches for integrating them into the Angular CLI.

Learn more about this and further architecture topics regarding Angular and huge enterprise as well as industrial solution in our advanced Online Workshop: 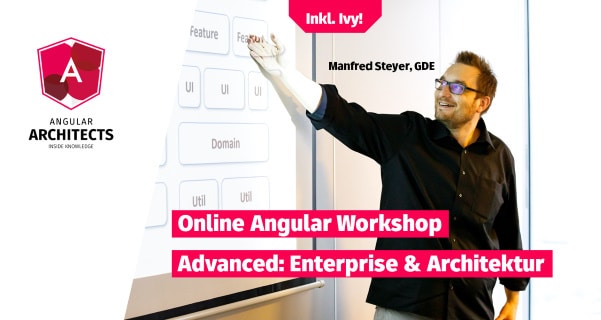 Save your ticket now or request an company workshop for you and your team!