So how can we build and maintain such software systems?

Domain Driven Design (DDD) provides the answer! Best of all, it is especially suitable for complex Angular solutions.

In this article we will learn:

All these topics are also part of our advanced Angular Architecture workshop. Have a look at it if you’re implementing business or industrial software with Angular!

As always, the examples used can be found in my GitHub account.

Big thanks to Thomas Burleson who deeply reviewed this article and contributed to it.

Let’s consider a consumer travel web application we are building. We have several domains that we can identify:

To manage complexity of these domains, we should leverage Domain-Driven Design and best practices from the Angular community.

Domain Driven Design comes with the two types of design

While the former one is about identifying domains and the communication between them, tactical design deals with structuring these domains.

I’ve already written about the use of Strategic Design in Angular applications. Have a look at this article for foundational understandings. Hence, here, I’ll focus on Tactical Domain Design.

Now let’s talk about how to structure our application with tactical design.

For domains we use column subdivisions ("swimlanes"). Moreover, those domains can be organized with layers of libraries which leads to row subdivisions: 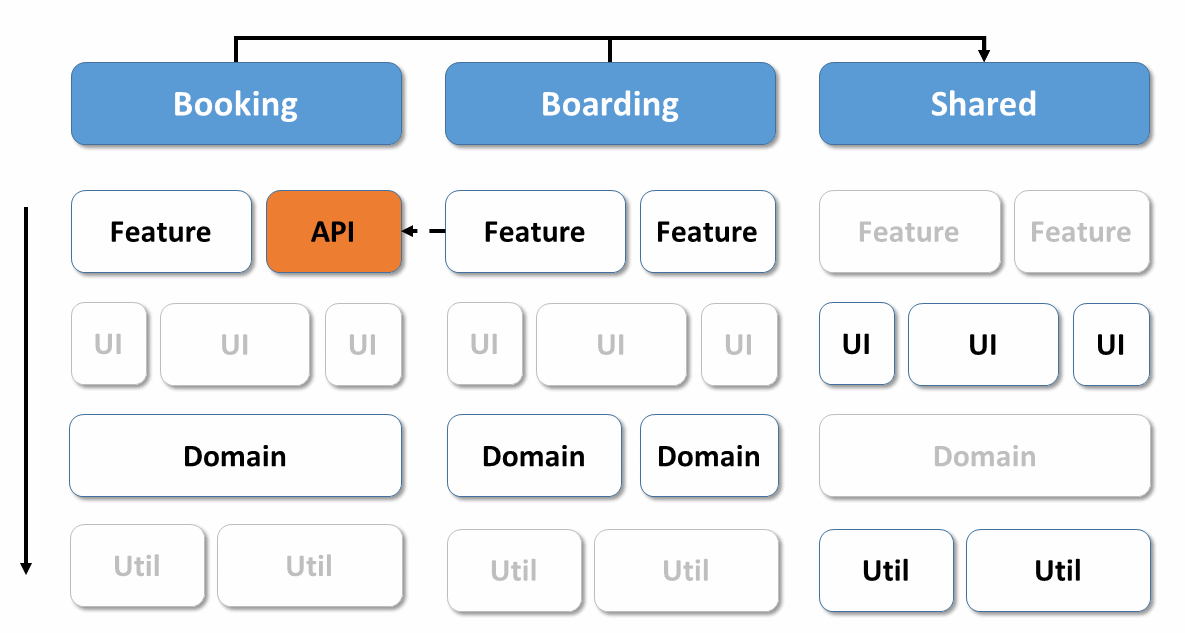 Note how each layer could consists one or more libraries

While using layers is quite a traditional way of organizing an domain, there are also alternatives like hexagonal architectures or clean architecture.

What about shared functionality?

For those aspects that are to be shared and used across domains, an additional shared swimlane is used. Shared libraries can be quite useful. Consider – for example – shared libraries for authentication or logging.

Note: the shared swimlane corresponds to the Shared Kernel proposed by DDD and also includes technical libraries to share.

How to prevent high coupling?

Access constrains define which libraries can use/depend upon other libraries. Typically, each layer is only allowed to communicate with underlying layers. Cross-domain access is allowed only with the shared area. The benefit of using these restrictions can result in loose coupling and thus increased maintainability.

To prevent too much logic to be put into the shared area, the approach presented here also uses APIs that publish building blocks for other domains. This corresponds to the idea of Open Services in DDD.

Regarding the shared part, one can see the following two characteristics:

What about feature-specific functionality?

Notice that domain-specific feature libraries, however, are not in the shared area. Feature-related code should be placed within its own domain.

While developers may elect to share feature code (between domains), this practice can lead to shared responsibilities, more coordination effort, and breaking changes. Hence, it should only be shared sparingly.

Based on Nrwl.io‘s Enterprise MonoRepository Patterns, I distinguish between five categories of layers or libraries:

This complete architectural matrix is initially overwhelming. But after a brief review, almost all developers I’ve worked with agreed that the code organization facilitates code reuse and future features.

To isolate the domain logic, we hide it behind facades which represent it in an use-case specific way:

This facade can also deal with state mangement. Two excellent articles are available for deep dives into those areas:

While Facades are currently quite popular in the Angular environment, this idea also correlates wonderfully with DDD (where they are called application services).

It is important to architecturally separate infrastructure requirements from the actual domain logic.

In an SPA, infrastructure concerns are — at least most of the time — asynchronous communication with the server and data exchanges. Maintaining this separation results in three additional layers:

Of course, these layers can now also be packaged in their own libraries. For the sake of simplicity, it is also possible to store them in a single library, which is subdivided accordingly. This decision makes sense if these layers are usually used together and only need to be exchanged for unit tests.

Implementations in a Monorepos

Once the components of our architecture have been determined, the question arises of how they can be implemented in the world of Angular. A very common approach also used by Google itself is using a monorepo. It is a code repository that contains all the libraries of a software system.

While a project created with the Angular CLI can nowadays be used as a monorepo, the popular tool Nx offers some additional possibilities which are especially valuable for large enterprise solutions. These include the previously discussed ways to introduce access restrictions between libraries. This prevents each library from accessing each other, resulting in a highly coupled overall system.

To create a library in a monorepo, one instruction is enough:

As you just use ng generate library instead of ng generate module there is not more effort for you. However, you get a cleaner structure, improved maintainability, and less coupling.

The switch directory provided by Nx specifies an optional subdirectory where the libraries are to be put. This way, they can be grouped by domain: 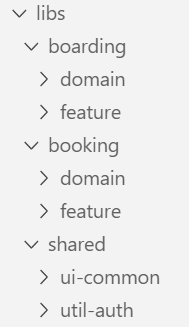 The names of the libraries also reflect the layers.
If a layer has several libraries, it makes sense to use these names as a prefix. This results in names such as feature-search or feature-edit.

In order to isolate the actual domain model, the example shown here divides the domain library into the three further layers mentioned: 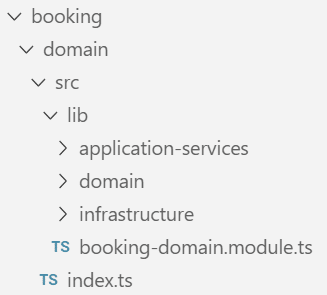 Builds within a Monorepo

By looking at the git commit log, Nx can also identify which libraries are affected by the latest code changes.

This change information is used to recompile only the affected libraries or just run their affected tests. Obviously, this saves a lot of time on large systems that are stored in a repository as a whole.

Entities and your Tactical Design

Tactical Design provides many ideas for structuring the domain layer. At the center of this layer, there are entities the reflecting real world domain and constructs.

The following listing shows an enum and two entities that conform to the usual practices of object-oriented languages such as Java or C#.

As usual in OO-land, these entities use information hiding to ensure that their state remains consistent. You implement this with private fields and public methods that operate on them.

These entities not only encapsulate data, but also business rules. At least the method setStatus indicates this circumstance. Only for cases where business rules can not be meaningfully accommodated in an entity, DDD defines so-called domain services.

Entities that only represent data structures are frowned upon in DDD. The community calls them devaluing bloodless (anemic).

From an object-oriented point of view, the previous approach makes sense. However – with languages such as JavaScript and TypeScript – object-orientation is less important.

Typescript is a multi-paradigm language in which Functional Programming plays a big role. Books dealing with Functional DDD can be found here:

With functional programming, the previously considered entity model would therefore be separated into a data part and a logic part. Domain-Driven Design Distilled which is one of the standard works for DDD and primarily relies on OOP, also admits that this rule change is necessary in the world of FP:

Here the entities also use public properties. This practice is quite common in FP; the excessive use of getters and setters, which only delegate to private properties, is often ridiculed!

Much more interesting, however, is the question of how the functional world avoids inconsistent states. The answer is amazingly simple: data structures are preferably immutable. The keyword readonly in the example shown emphasizes this.

A part of the program that wants to change such objects has to clone it, and if other parts of the program have first validated an object for their own purposes, they can assume that it remains valid.

A wonderful side-affect of using immutable data structures is that change detection performance is optimized. No longer are deep-comparisons required. Instead, a changed object is actually a new instance and thus the object references will no longer be the same.

To keep track of the components of a domain model, Tactical DDD combines entities into aggregates. In the last example, BoardingList and BoardingListEntry form such an aggregate.

The state of all components of an aggregate must be consistent as a whole. For example, in the example outlined above, one could specify that completed in BoardingList may only be set to true if no BoardingListEntry has the status WAIT_FOR_BOARDING .

In addition, different aggregates may not reference each other through object references. Instead, they can use IDs. This should prevent unnecessary coupling between aggregates. Large domains can thus be broken down into smaller groups of aggregates.

Domain-Driven Design Distilled suggests making aggregates as small as possible. First of all, consider each entity as an aggregate and then merge aggregates that need to be changed together without delay.

Facades (aka Applications Services) are used to represent the domain logic in an use case specific way. The provide several advantages:

Independent of DDD, this idea has been very popular in the world of Angular for some time.

For our example, we could create the following Facade:

Note the use of RxJS and observables in the facade. This means that the facade can auto-deliver updated flight information when conditions change. Another advantage of Facades is the ability to transparently introduce Redux and @ngrx/store later when needed. This can be done without affecting any of the external application components.

For the consumer of the Facade it is not relevant whether it manages the state by it self or by delegating to a state management library.

Developers are encouraged to read/watch Thomas Burleson’s work about this topic:

While it is a good practice to make server-side services stateless, often this goal is not performant for services in web/client-tier.

A web SPA has state and that’s what makes it user-friendly!

To avoid UX issues, Angular applications do not want to reload all the information from the server over and over again. Hence, the Facade outlined holds the loaded flights (within the observable discussed before).

Besides performance improvements, using Observables provide a further advantage. Observables allow further decoupling, since the sender and the receiver do not have to know each other directly.

In the shown example, a domain event could indicate that a passenger is now BOARDED. If this is interesting for other parts of the system they can execute specific logics.

For Angular developers familiar with Redux or Ngrx: Domain events can be represented as dispatched actions!

The ideas of Domain-Driven Design are known to pave the way for micro-service architectures. Hence, client-side DDD can be used as a basis for micro frontends.

The access restrictions discussed above ensure a loose coupling and even allow a later split to multiple repositories. Then you can talk about micro frontends in the classic sense of a micro-service architecture. However, in this case the team has to take care of versioning and distributing shared libraries which is common with micro-services.

More thoughts about this topic can be found in my blog article It’s about cutting your domain, not (first and foremost) about micro frontends!.

Due to the object-functional nature of TypeScript and prevailing customs, a few rule changes are necessary. For instance, we usually use immutables and separate data structures from the logics operating on them.

The implementation outlined here bases upon the following ideas:

Besides, a team also creates the conditions for micro frontends by using client-side DDD.

If you want to see all these topics in action, checkout our Angular Architecture workshop.